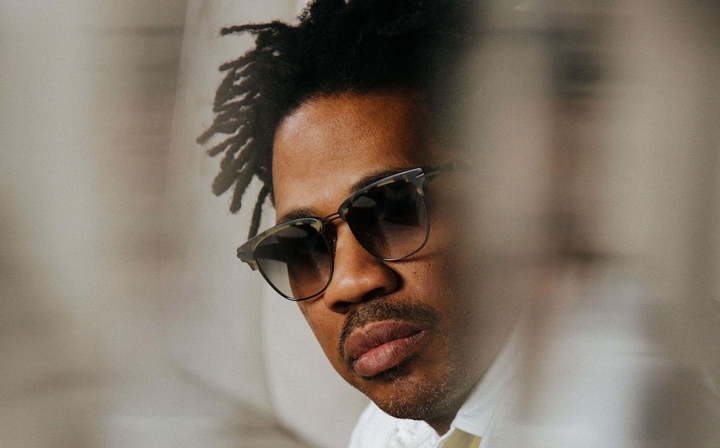 Ahead of the legendary Chicagoan producer’s appearance on June’s edition of the monthly Join The Future show, host Matt Anniss takes a trip through the nooks and crannies of his vast discography…

It would be safe to say that Ron Trent has enjoyed a highly successful career. Ever since he made his debut on acid house legend Armando Gallop’s label, Warehouse Records, in 1990–remarkably, he was just 17 at the time – Trent has done more to shape and define deep house than any other producer bar his Chicago compatriot Larry Heard.

During that period, Trent has released countless dancefloor classics, both as a solo producer and alongside regular collaborators such as Detroiter Chez Damier, with whom he launched the now legendary Prescription label (and its numerous offshoots) in 1994. He’s also laid down an insane number of remixes for friends and other artists, released a handful of albums, dabbled in nu-jazz, downtempo and Balearica, and mentored younger producers such as Anthony Nicholson and Trinidadian Deep. This month, he’s releasing his most ambitious record yet, a collaboration-heavy album

(Khruangbin, Gigi Masin, Jean-Luc Ponty and both surviving original members of Azymuth all feature) called What Do The Stars Say To You, credited to his rarely used WARM alias. It’s a brilliant album, and the reason I was able to get some time to talk to him for this month’s edition of Join The Future on Noods. You can hear our conversation when the episode airs on Wednesday 22 nd June at 15:00 BST (and afterwards via the Noods website and Mixcloud channel).

To get you in the mood for that, and to help those who’ve yet to dive into Trent’s staggering deep discography, I’ve put together this introduction to his career in 20 tracks. It’s not a definitive ‘best of’ or merely a list of much-loved club classics, though it naturally does contain some of his most famous productions. Alongside those you’ll find a mix of personal favourites, curiosities, remixes, rarities and tracks that you simply need to hear.

• Join The Future: Bleep Techno and the Birth of British Bass Music by Matt Anniss is out now on Velocity Press. You can check out previous Join The Future shows here

Where it all began. Recorded in the mid 1980s in a friend’s bedroom when he was just “13 or 14” years old, ‘Altered States’ remains a peerless, timeless Chicago classic that sits somewhere between jacking house and early Detroit techno. Simple but devastatingly effective, the near 14-minute workout adds ghostly, spine-tingling chords to a nagging synth hook and a blistering drum machine beat. Arguably the greatest debut in the history of house, and that’s saying something!

Two years on from the release of ‘Altered States’, a then 19 year-old Trent started releasing deep house records of the sort that would become his trademark in the decades to come. ‘Love Affair’ – and particularly his own ‘Soulful Mix’– has all of the musical ingredients he’d come to be known for – ultra-positive chords, spacey synths, life-affirming melodic motifs and warming bass – as well as a gloriously uplifting piano riff.

Tucked away on the B-side of the States EP, whose A-side featured two new versions of ‘Altered States’, this outing on Cajmere’s Cajual Records is the epitome of a flipside classic. Warm and breezy, it fuses together classic-sounding Chicagoan drums, the dreamiest of chords, a lovely organ line straight out of New Jersey garage-house, and flowing piano solos that recall the very best of Italian dream house.

In late 1992/early ’93, Trent was introduced to Chez Damier, who was then working at Kevin Saunderson’s KMS Studio in Detroit. The pair clicked musically and started recording music after-hours at KMS. Saunderson released their first fruits of their labours, ‘The Choice’, on his own label. This EP-leading vocal version is warming, soulful and summery, adding a touch of New Jersey garage swing to the pair’s Chicago and Detroit influences.

Following their release on KMS, Damier and Trent decided to launch their own label, Prescription Records. Trent’s first track on the label was this gem, which featured on the imprint’s second 12” and was credited to Nagual (an alias he never used again). Refined, picturesque and undeniably mood-enhancing, ‘I Feel The Rhythm’ boasts a near perfect blend of locked-in grooves, undulating melodic motifs, echoing organ sounds and druggy, dubbed-out electronics.

Famously inspired by a trip Trent and Damier made to the now near mythical Sound Factoryclub in New York – and in particular the mind-altering music that resident DJ Junior Vasquez would play on the venue’s incredible soundsystem – ‘Morning Factory’ is one of the most celebrated deep house records of all time – and with good reason. It could well be the greatest after-hours house record ever made: an hypnotic, ultra-deep concoction that sounds perfect blasting out of speakers while the sun’s coming up (I know: I have played it on such occasions numerous times over the years).

Although Trent began remixing other artists early in his career, it took a while for him to really get into his stride. Arguably his first classic remix – at least as a solo artist, rather than in cahoots with Chez Damier – is this languid, afternoon-ready rework of ‘Escape That’ from 4 Hero’s 198 album Two Pages. Utilising the original version’s jazzy instrumentation and adding tons of new percussion and musical motifs of his own, it’s a rework that does a lot keeping its focus firmly on the dancefloor. If you like your club music loose, soulful and full of top-notch musicianship, you’ll love it.

During the latter years of the Prescription Records story, Trent took time to encourage and mentor a handful of up-and-coming artists. One of those was the now well-known and well- regarded Anthony Nicholson. Together, the pair released the Afro Nova EP in 1998, which features this inspired beast on the B-side. Deep house-goes-samba with an insanely weighty bassline, deep space pads and Trent’s usual Latin-influenced percussion touches, it’s one of my favourites from the Chicagoan’s vast catalogue (and that’s saying something).

1999 saw the release of Trent’s debut album, Primitive Arts. It marked an important point in his career, not least because he used the opportunity to showcase some of his non-dancefloor focused musical influences. Of course, there were high-grade club cuts on there – including remakes of some of his Chez Damier collaborations and Prescription-era solo cuts – but also a handful of more downtempo excursions. ‘Family’, a deep and dreamy chunk of downtempo nu-jazz with deep house sonics and breakbeats reminiscent of hip-hop, is one of the best of these.

By the early 2000s, Trent had relocated to New York, where he – in his own words – had to prove himself again in a city with house music heroes of his own. He did just that of course, becoming a regular at the Body N Soul and Giant Step parties, as well as the Shelter club. He paid tribute to the latter on this fine remix, which shows the increasing influence of New York and New Jersey’s soulful, Latin-tinged vibe on his productions.

Trent’s time in New York was also marked out by a new willingness to work with sessionmusicians and incorporate their performances in his productions. This one-off release by studio band Tribute – so-called because ‘The Session’ is an organic deep house cover of Roy Ayers’ classic ‘Running Away’ – is notable for its’ use of congas and other hand percussion; this would become a Trent trademark in the years that followed.

Deep house jazz with a heavy dose of dub-wise vibes, Ron Trent style. The Chicagoan released two EPs as Ital Foods, plus a handful of alternate remixes and reworks (including a tasty ambient dub version of this track) in the early-to-mid 2000s.

These days, Trinidadian Deep is a well-known deep house producer in his own right, but back when this record was made and released in 2006 he was still a fresh-faced upstart. He provided the toaster style spoken vocal in his distinctive style, while Trent handled production. The results are, of course, inspired, with Trent joining the dots between the far-sighted futurism of proper Motor City techno, electronic dub and his own loose, languid and Lovely deep house sound. Trinidadian Deep went on to release countless records on Future Vision, one of Trent’s labels, before striking out on his own.

In 2008, Trent delivered his second album, Ancient/Future. It was credited to a new alias, Cinematic Travels, a decision he made in order to reflect the contribution of other musicians and his conscious move away from the dancefloor. The set did a terrific job in laying the foundations for what was to come with his WARM project, offering a beautiful, slow- burning mixture of downtempo grooves, deep nu-jazz and widescreen ambient soundscapes. 'Our Sunrise' is my pick, but there are plenty of other gems on the album.

I’m not quite sure whether this remix of contemporary soul great Jill Scott’s ‘Spring Summer Feeling’ was commissioned, but it was never officially released. The ‘unofficial’ white label 12” it appears on is now hard to get hold of, and it’s easy to see why: it’s one of Trent’s most luscious, layered, emotive and summery remixes. It came at a time when he was exploring the potential of African rhythms within his deep house tracks, and you can hear

Like many Chicagoans – as well as house heads around the world – Ron Trent was devastated by the news of ‘Godfather of House’ Frankie Knuckles’ death in 2014. Knuckles had been a big supporter of Trent’s work, and his love of mood-enhancing synthesizer chords and life-affirming melodies were clearly an inspiration for Trent’s own musically rich and emotive take on house music. ‘7 th Heaven’ is Trent’s tribute to Frankie Knuckles, recorded and released a few months after his death. As you’d expect, it’s nigh on perfect.

Trent has long been a fan of Brazilian jazz-fusion greats Azymuth, so jumped at the chance to remix the title track from their 2016 album Fenix. Adding his own Brazilian-flavoured percussion and spacey synths to the band’s bass, drums and keys, he turned in a near 12- minute, shapeshifting epic that joins the dots between Brazilian musical culture and his own spiritually enhancing take on deep house.

Trent’s take on deep house/dub house fusion, with added freestyle percussion solos and delay and reverb aplenty. Throw in a rather filthy analogue bassline and occasional slivers of echoing piano, and you’ve got an unheralded, heads-down classic. One for those moments when you just want to get lost in the groove.

Before the world shut down for two years due to the darn pandemic, Trent introduced the world to WARM – though few people took attention. WARM is, he explained, his “band project”, though thanks to the pandemic he ended up producing it all himself with remote contributions from various high-profile collaborators. ‘On a Journey’, which featured on that first WARM EP, is Trent in fully organic mode, sitting somewhere between the stoner art-rock of Steely Dan, colourful Baleric soundsystems, soft-spun psychedelia and classicdowntempo goodness.

Full disclosure: this actually came out on a mate of mine’s record label. When I wrote the sales notes/press release, I described Trent’s full vocal rework of a modern Balearic pop gem as being “a future deep house classic”. That description still fits, as the remix has lost none of its allure in the year and a bit since it was released. Trent handles the vocals really well, stamping his vibe on the track while sustaining some of Harks and Mudd’s original elements.

One of the many highlights of Trent’s new album as Warm. And yes, it really does feature that Khruangbin. Sonic perfection.

Listen to Ron Trent in conversation with Matt Anniss on Wednesday 22nd June, live on Noods at 15:00 BST and check out his archive of shows for us here.