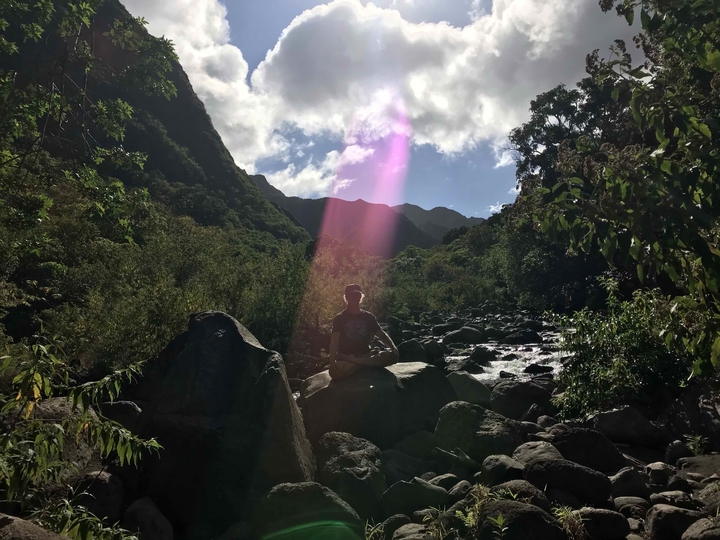 From listening to John Peel’s show to hosting his own, Tony’s always been keen to learn and share knowledge. Whether this be through his radio show ‘Nog Zone w/ Anthony Child’, his psychedelic drone project Transcendence Orchestra or the advice he gives to his mentees, there’s always space to explore new ways of forming relationships with music

For some, radio is definitely the medium that doesn't quite tick all the boxes. When we think about radio our minds can wander back to the mundanity of cross country family car rides soundtracked by “The Archers”. However, as with most mediums of communication we can find different outlets within each that speak to us where others may not. When Tony was younger it was John Peel’s Radio 1 show that spoke to him the most, ‘you would hear such a variety of music — I don't think any one person could actually like everything he played, that was kind of part of it, it’s like there was always going to be something he plays that you absolutely hate, and you’re like “no i'm not into that”, but it's amazing that everyone I knew from my generation would listen to his show because he played punk or techno or whatever you know? You would always get to hear other stuff you had never imagined before’. Tony explains this showed him not to see music so unidimensionally. ‘The boundaries that I thought were there are ridiculous, forget them and it opens up your world. It makes your world a wider, richer and more diverse place’. Tony explains he’s never had a grand plan but has always been keen to learn ‘it's really about what I'm feeling, what I'm interested in, who I want to work with, it's just kind of following your heart and your nose’.  This is probably the reason it took him until 2013 to get a radio show of his own despite his prior accolades; of which actually included putting together a guest mix for ‘John Peel’; he took the opportunity to take himself outside of his self-described ‘comfort zone’.

One element within his show ‘The Nog Zone w/ Anthony Child’ is his idea that psychedelic music is actually a very vague term, meaning something different to most people. Exploring this has given Surgeon the opportunity to take a backseat and let Anothny Child get behind the wheel, far away from the club and into the ‘Nog Zone’. Tony explains ‘The Nog Zone is a particular state of mind. All of the music I play on the show falls under the umbrella of this kind of mindstate, but it also goes along with the way I present it. I try to speak fairly slowly and it's’, I don’t know... there’s  something a little weird and culty about it’. This idea encapsulates the essence of the show and the music he plays within it is just a means for Tony to create his world to escape in.

One track of note is Family Feudal by Tears|Ov which takes the weirder and less TV friendly audio snippets from Family Feudal as well as utilizing otherworldly sounds. The middle ground found rests between chaos and order which leaves the listener in complete awe. Tony explains ‘the track is like throwing a curveball at people, like ‘Oh what's going on now!’, showing how powerful and psychoactive music on its own can be - it can put you in a specific mindstate’. Tracks like this which take from all reaches of experimental, noise and drone can tend to come from niche music scenes, and so there seems to be more culture of home listening, leaving the people who enjoy this sort of music with a more personal and intimate connection to it. This is quite different to the more club focused music associated with Tony’s Surgeon outfit, which has more of a tangible sense of community due to the nature of it being played at clubs. The music played on Tony’s show can at times feel quite introverted and something you may like but no one else you know does; it's clear that what makes ‘The Nog Zone’ a truly special place isn't just the music, but rather the space and time Tony has spent building a place for people to enjoy the music and feel a sense of community. ‘I really try to encourage people to join in on the message board and get involved. It’s quite fun, I share links to all the music, we talk about it, and that's something I'm really keen on building — the idea you know the people chatting while the show is on, it’s funny because a lot people often say ‘oh has an hour gone already’, they were sort of off in a bit of dream world you know, or they were making a cup of tea and they forgot to take the bag out or whatever, they got distracted by the music you know, and that’s definitely an essential part of The Nog Zone, it takes you off somewhere’

If you like the sounds of the Nog Zone and want to get a taste of it in person, Tony has another project with Dan Bean titled the ‘Transcendence Orchestra’. The project that came around quite unexpectedly through a jam session at Dan’s house ‘We didn’t really set out with an idea we just were playing around with some instruments at his house and were just enjoying holding long notes. Taking inspiration from American minimalist composers like La Monte Young, Terry Riley and Steve Reich but also combining it with psychedelic music and a touch of folk, ‘it’s a convergence of a lot of different things’. When they eventually took this idea out of Dan’s living room and started doing performances they found ‘a lot of people are really used to how dance music affects them, when you go out it’s loud, you feel the bass, a lot of people are really familiar with that. We had this idea of showing people how physical tones alone could be, when there are not so many obvious rhythmic elements, how physically powerful but also how mentally powerful it can be to affect a person’s state of mind in a profound way’. Tony feels that even his headspace while performing under Transcendence Orchestra is completely different. ‘I am as out of my head as the crowd is, from the music you know. I am as involved and affected by the sounds as the audience, so it’s a very different relationship where I am really a part of the experience. Instead of DJing where you are more conducting, rather than really absorbed into it.’ The main goal with the project is clear - ‘just to give people a different experience of sound than they might have had before’.

But even Surgeon has to let this urge to create rest sometimes. Having a life surrounded by music requires rest periods, especially when touring is involved. ‘Touring and playing music is such an insane and unnatural kind of lifestyle’, there becomes a need for escapism, where you step away from the hardware and concentrate on the more ethereal. It took a while for Tony to notice this, in fact it was his yearly doctor's check-ups which set him on a new path. ‘The doctor said your back is kind of fucked and you may not be aware of it now but when you get older you are going to have really bad back problems, I thought I can see where this is going, so I was like ok, that doesn’t sound too good, he must have mentioned something about how yoga can be good for that, he wasn’t an expert in it but he mentioned it. My wife Doris had done a bit so we just got into it together’. Music is Tony’s life but yoga has become his true escape - a term which he has taken rather literally. For the past 10 years  he has spent a couple months each year ‘away from techno’ in Maui with his yoga teacher. ‘She lives pretty much literally in the jungle and it’s  away from the touristy stuff, so it’s a very different world to cities and techno.’ This was Tony’s balance pre-pandemic, ’10 months of crazy parties and clubs, then two months of jungle, sun, beach and yoga’.

‘When I started out in the techno scene, it was a lot more diverse than it is now. I started playing in the 90’s and when I was first touring in Europe most of the artists I played with were black American DJs because that was undoubtedly the source of techno at the time. Over the years it’s gotten much less diverse than it used to be’. This got Tony asking himself what he can do to constructively make a difference. The answer was to start mentoring some up and coming artists in the Bristol scene. ‘What I realised is that there might be a lot of things I’ve learnt over the years that seem really obvious to me, but I’ve realised since sharing it with Nic & Josh, Chad, Layla and Nathan. It just helps with stuff I might have had to learn the hard way’. Tony’s a keen fan of the Bristol scene and wants to hear more of it echoed in the mainstream of techno, ‘Bristol’s a bit of an island to be honest. The sound, the scene and the parties are pretty unique, but it’s kind of isolated , you go outside Bristol and it’s kind of different’. Unlike most mentoring Tony doesn’t have a syllabus or a timetable it’s more about him really getting to know his mentees and their music, it’s important to him to never be overbearing ‘I don’t want them to sound like me I want them to keep their own sound. But I also want to be open, I learn a lot from  them as well, I want to have my ears open and hear ideas. It shouldn’t be a one way street’. Tony’s got a lot planned for his mentees, he wants to introduce his audience to what Bristol has to offer ‘there’s something about Bristol which is quite unique, the people there are very involved in it, but once you leave Bristol things are very different’.

It's clear to see Tony’s ethos towards music holds true throughout all of his projects whether that be his radio show ‘The Nog Zone’, his mentorship programme, his relationship with the music he plays is not just about the sound, it’s about the people and showing them the joy of experiencing something as a community. Whether that be holding indefinite notes on instruments for deep meditation, dressed as some sort of druid, or curating nights at the Cause with his mentees at the forefront — his continued curiosity with music speaks volumes about him his dedication to the craft.