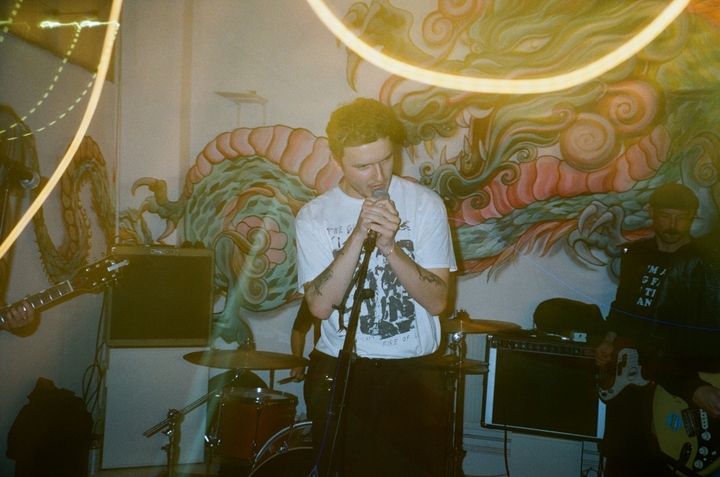 For the August Resident Focus, we spoke with Max from Rain World about their beginnings, tracks for various moods, the dream retirement regime, where they find inspiration, and other parts of their existence. Get involved with this incredible bunch.

NHow are you spending your days at the moment?

MSo the whole of Rainworld is currently living in Hackney not too far from one another and have been for a while now.. we try to go to as many gigs as possible, definitely spend the majority of our days, when not working, in the boozer and attempting to write horrendous music. Maybe that’ll change as we get older but to be honest I hope not.

NFavourite thing to hear in nature?

MThe sound of a warm can of stella opening.

NHow has where you grew up informed your taste?

MWe’ve been quite lucky as most of us grew up in Manchester.. probably one of the most significant cities there is for music culture. From a young age I took a keen interest in the musical trail Tony Wilson left behind him. I mean you basically just need to watch 24 Hour Party People and you’ll see what I mean. Mancunian music/people will always inspire me on a daily basis. It was actually the original concept behind Rain World.. our own weird northern world we grew up in - gloomy as fuck, no one will shy away from telling you what they think, rain’s all the time and has a certain unmistakable eerie sound to it's music. However one of the best places on the planet and some of the soundest people you’ll ever meet.

NWhat is inspiring you outside of music right now?

MDefinitely my friends, meeting new people and visiting new places.. maybe all three at once. We’re very fortunate as we’re surrounded by amazing people who are also total weirdos in their own way. I think everyone in Rain World would agree on moving to London and meeting the people that we have, has been probably the biggest inspiration in most of our lives.

NThree artists which you think are criminally underrated?

NYou’re cycling home after a breakup, what are you listening to?

MAw god probably 'It's Been A While' by Staind lol

NWhat do your parents think of your music taste?

MI have them to thank a lot for my taste so hopefully somewhat decent. My mum got me into dance music and my dad got me into various avenues of guitar music. I guess everything in between I’ve found myself… I imagine the same goes for the rest of the Rain World fam.

NWho’s your favourite party/promoter in your city right now and who did you see play most recently?

MI probably don’t have a favourite promoter but I would definitely say my favourite party is Deptford Northern Soul Club at Moth Club, Hackney. They usually throw it every month or two and have the DNSC residents dj.. I've never left that night without dripping in sweat and having danced my arse off pissed as a fart. Amazing music and always an amazing crowd who are totally up for it

NYou’re about to do karaoke with someone famous, who are you doing it with and what are you singing?

MEvery day without fail.. Shane Macgowan (my idol) from The Pogues and we’re singing ‘A Pair Of Brown Eyes’…one of the most beautiful pieces of music ever written in my opinion. Long Live Shane.

MI'll be retiring as soon as I can't hack London anymore haha. I'm thinking... somewhere on the coast in the UK (wherever my other friends also fancy settling down), maybe like Hastings or Swansea or some shit like that. A reasonably sized gaff with a massive garden that looks out to the sea that I share with my partner and a few dogs. The world's best old school boozer a few metres away from my front door (called The Fiddling Pig or something) that plays all the oldies where me and my friends can go and drink Guinness + watch the football with our dogs every day, occasionally heading into town for a kebab. Might be bog standard but that sounds like heaven to me.

What are you doing? Head over to Rain World's resident page have a dig through their shows, exploring all things Punk, Psychedelic, Country, Dark Wave and all else experimental.