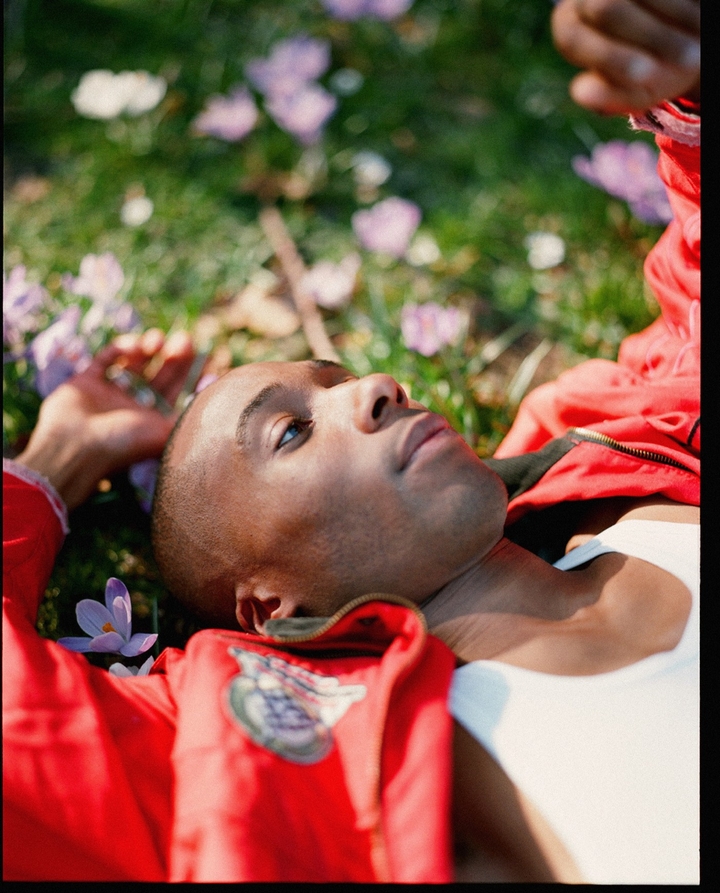 With a handful of releases for Black Acre, Evadney explores themes of love and family through his music. As he prepares to release his debut album, Evadney shares his thoughts on the universal nature of love and the ways we can embrace it in our day-to-day.

“You know in a Fantasy movie, like Game of Thrones or whatever, [how] you have the warriors, the archers and all these other people on the front line,” says Evadney over a video call, where he faces the screen enshrined by a verdant crop of healthy-looking house plants,“But you also have the wizard dude that doesn’t go to the battle — he just stays back. I’m not on the front line in that sense [and] I’ve become comfortable in that space […] I’m just trying to understand what’s moving behind everything.”

Growing up in a Caribbean family where music was surprisingly absent, Evadney’s journey to becoming a singer-songwriter has happened from the outside looking in, away from the spotlight. He tells me how, as a child, he used to enjoy music in secrecy, singing to himself and performing as soon as his parents left the house. The second they returned, it was back to pretending that it wasn’t something bursting to get out of him. Thankfully, at secondary school, Evadney was coaxed in front of an audience by his English teacher who — after noticing his talent amongst a group of students on a choir tour — strongly advised him to audition for the lead role in the musical he would be running later that year: Cabaret.

“[The teacher] was called Mr King and he did this really weird, dark version [of the musical] […] I was this black guy playing a cabaret dude, who then turns into this Nazi officer. It was the first time I’d ever really sung; that’s where it all began.”

This was Evadney’s first taste of performing and although he enjoyed it, he never dreamt of pursuing it any further. Instead, he clung to his childhood dream of becoming a pilot. But when the reality of A-Level Maths and Physics struck, his fervour for flying soon fizzled out. Once high school ended, a friend invited Evadney to come and visit Sheffield University with her. There, Evadney walked into the clearing office and impulsively enrolled on a Media Communications course just because he “wanted to go somewhere.” Several months later, united with a new friend from his halls, they formed his first ever band and music began steadily taking centre stage in his life.

Reminiscing of open mic nights playing at a wine bar brought back fond memories. At university and beyond, he tested the waters with bands spanning a variety of genres (from Acoustic to Post-Rock) but once again it took an outsider to guide him in the right direction. “[My friend] Steph asked if I’d ever considered doing something that was just my voice […] So then it was about finding the only things that were necessary to accompany the voice,” he remembers, reflecting on his steps towards working alone.

Inspired by the way Björk reinterprets her albums with orchestras and audio-visual displays, Evadney wanted to give his words space so that they could be open to a myriad of soundscapes. “Ultimately what is the most interesting for me is having songs that can transplant themselves into different arrangements or constructions,” he explains.

Strings scatter through a cavernous chamber where water soon trembles under every pluck. Besides that and a thinly-veiled, starry synth that rises from the depths, there is little to interfere with Evadney’s voice in I Think of Being in Love, the opening track on his debut EP Sold Love, Sold released by Black Acre. In the song he sings,“I think of being in love / And all the ways / We repress it,” laying the foundations for one of the principal themes in his music. “[There’s] the absence of love and the arrival of it, and the contrast between the two. For me, that’s all there is; that’s everything.”

He speaks of love as an all encompassing thing; an approach to every interaction. With something so open-ended and personal as love, he has a series of false starts as he tries to explain to me what aspects of it his music explores. In the end, he resigns to sitting in silence so he can gather his thoughts. As he reflects, I’m reminded of a book — A Little Life — by Hanya Yanagihara, which explores love in a revolutionary way. The story centres on a group of close friends and amongst the friends, one of them — Jude — has been a victim of sexual abuse during childhood. By vividly recounting Jude’s traumas, Yanagihara passionately poses the idea that love is far more complex than our popular understanding of it: love can be free from sexual or familial ties. In fact, it is this love that has the greatest impact on Jude’s life. It is this love, which saves an emotionally and physically tortured human being.

However, in society, marriage is still the word we use to represent the most significant form of love; it is celebrated as the pinnacle above all other forms of relationships. But why must marriage be the pinnacle? Why is there no marriage equivalent for friendship? Upon hearing this question, Evadney returns from his thoughts and takes a step closer to unpicking the root of his music, recalling a close relationship he had at school.

“One of the first really important [relationships] in my life was with my best friend at school, this guy called Andrew; and he was Straight. Our friendship was so special [because] there was no reason for the two of us to be friends other than the fact that we genuinely enjoyed being around each other.”

“Often you will find that gay men have lots of female friends because there’s a vibe together. But I often found my relationships with heterosexual males to be the deepest, because it’s a place where like, this shouldn’t be safe, but this totally is; and when you find that, it’s really exceptional because it goes against so many things.” It’s hard to deny that the celebration of diversity has improved with each passing decade. Some might even herald places like London as the model of a diverse, forward-thinking city. Yet, although London has people of many different backgrounds, ethnicities and sexual orientations co-existing, how often do those people mix and interact?

Evadney grew up in London but has since moved to Brighton with his boyfriend — a move he didn’t realise would be so important for him. Comparing two cities like Brighton and London, Evadney states that Brighton is a more fluid city than London, which he describes as a “low-level version of what diversity looks like,” before correcting himself and replacing ‘diversity’ with ‘fluidity’.

Our tendency to don a mask for whatever occasion is so normalised now that it’s hard to imagine what life would be like in the absence of this behaviour; places that are not heavily surveilled and/or bureaucratised are becoming near impossible to come by and we act according to media trends more than our intuition. With this bureaucracy, surveillance and lack of integrity comes a lack of trust. As a result, we are left fractured pawns moving over a broken board.

“I feel like the whole world is patching things up — it’s always a quick fix — until you realise that the whole board is broken. That’s what I’m singing about. I’m trying to stimulate thought about the board itself because the board itself creates broken players.” However, he believes there is a way out of this through inner exploration. “In the song Anchor Me, there’s a bit where I talk about soul retrieval. That’s where you’re retrieving parts of you so that all of you is there [, whole].

The song celebrates family, another topic he can find challenging to grasp. Although I had my suspicions, Evadney is only his artist name, taken from his mother’s middle name. He decided to name his solo project after her shortly before she was diagnosed with an early onset of dementia. Now, the younger of his two older sisters is her primary carer and Evadney makes frequent trips back to London to help out. He tells me she “is running through [the music] quite a lot,” in a way that he is unable to pinpoint. Recently, he discovered that he still has voice recordings of her on his phone that might surface as samples in his upcoming debut album.

Embracing shock and trauma is all part of his journey to love, because if “separation is inherent in your first understanding of yourself, then separation is often how you go about the world,” he tells me. To overcome this, he goes out of his way to delve into the “residue at the bottom of his emotional cup” as he calls it; it’s something he has done since he experienced a significant fallout in his teens.

“When I was sixteen, I was going through puberty and I came out to my family as being gay and what I experienced was that there was an axis that was like this,” he says, putting his forearm up to represent an x-axis, “And black people understood this. It was like, this is what happened; these were the struggles that happened; this is where someone is an ally; but then, my sexuality was like this,” he puts up his other forearm to cross his first, making a y-axis, “[And] it didn’t make any sense. All of the things that made sense — like where there’s the oppressor and the oppressed — suddenly didn’t make sense [anymore] because you had super-homophobic things happening in the black community, [especially] in the Jamaican community.”

“If I walked into a room, it was like, OK we understand who we all are: we’re all from the same place and we’ve all experienced this. But then, if you put your hand up and say, No hold on, I’m gay, all of a sudden everyone just moves away. [Even] the gay community, in my first experiences of it, were a little bit shallow. I found that the gay community was very conservative, not progressive.”

“There was never a place where I felt entirely comfortable. I was always, somehow, the odd one out in the room and that’s really where [the music] all comes from. It’s this search for: Where is the love? What does love mean for you? And what are the boundaries around that? This is what I think defines my early experiences of moving through the world.”

As the sun begins to set, leaving him in almost complete darkness, our conversation draws to a close. Only a year ago did I first hear of Evadney through a Black Acre guest show on Noods Radio which he hosted. Fast forward to now and I’ve had one of the most open conversations about love with a near stranger that I’ve had with anyone. If the medley of healthy houseplants that now shroud him in a deep emerald aren’t evidence enough, the past two hours of talking with me proves he practises what he preaches.

“[Love] for me encompasses much more than just relationships so, when I say that all my songs are about love, there’s actually an enormous spectrum to that.”

At the start, he compared himself to a wizard interacting with and examining the battlefield from afar. The distance he spoke of must only have been a creative one because, emotionally and physically, he wholeheartedly embraces the world around him. With each release, each radio show, each live show we are lucky enough to be touched with a delicate glimmer of his magic. However, instead of a wizard, I would like to think of him as more like the sun: distant yet centre-stage and brilliant, imparting his universal warmth.

You can find Evadney on Instagram here or check his Spotify out here.

Go see him perform on these dates: