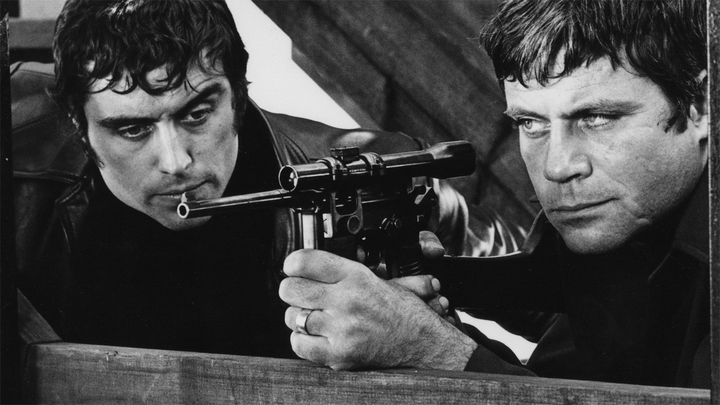 Hellfire Video Club are back with another trio of vintage film recommendations. No specific theme this month, just a fistful of that good shit. Seek them out.

The boom in low-budget horror films that burst out of the underground in the 70’s and 80’s will forever reward intrepid viewers with new ways to lose brain cells. Frozen Scream is a particularly difficult sell (glacially slow, no real plot, bad acting, confusing mess etc) but for those in it for the VIBES this is definitely worth seeking out. Renee Harmon stars (and writes, produces and directs!) as a scientist making an army of slow-moving, moustache-wearing, sometimes-naked, sometimes-wearing-cloaks zombies. Why? Who knows?! This film has one of the thickest and gloopiest somnambulist vibes in any genre film. All dialogue is disconnected and drifts out of characters mouths, actor’s look through each other and wander about, the plot is baffling and non-existent. Does this film really exist? Did I actually watch this, or was it all a dream?? I’m not gonna check.

Intriguing sort-of-sex film from 70’s New York. All shot in black and white (with a similar feel to “Putney Swope”) this film follows a young lady who receives a obscene phone call which sparks some sort of sexual awakening — she then traipses round the city trying to locate the caller, only to come into contact with various other freaks and oddballs with different perverted peccadilloes. Satirical and playful, but also pretty unashamed, this deserves to be seen by more cult film enthusiasts. Recently unearthed from obscurity by the good folks at Vinegar Syndrome. Incidentally, the director Nelson Lyon had a stint in the early 80’s working on Saturday Night Live and was the last person to see James Belushi alive, joining him on a three-day bender round LA!

A good old-fashioned British crime flick. Two thugs break out of prison, but rather than lay low one decides to try and kill his wife and her new lover, all the while they are being pursued by a tough detective. Fantastic and gritty crime drama, filmed on location in 70’s London and with an excellent cast: Oliver Reed and Ian McShane as the convicts, Edward Woodward as the detective. Reed in particular is on top menacing form. Also boasts a killer score by cult British composer Stanley Myers — one for the beatheads.