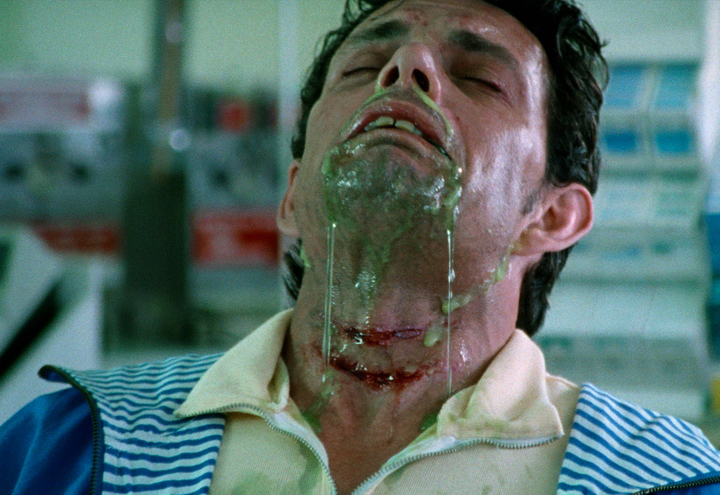 It's August, the world is melting and soon we will too. Come and hide your head in the sand with us and focus on some absolutely gleeful garbage cinema:

A huge Hellfire video club favourite, we screened this at our second ever event back in 2011. Here's how we described this seminal slime fest then: "The plot revolves around how the vagrant population reacts to a batch of highly toxic vintage booze that gets released into circulation whilst veering off on a few fairly ugly tangents. Boasting some of the most splatterific SFX of the 1980s, a plot that gleefully aims to offend pretty much every demographic possible and all filmed with some pioneering use of steadicam (by the guy who went on to film Titanic!)". It's guaranteed to offend, as some of society's most vulnerable people are portrayed as violent, scheming criminals - but it's transgressive charms derail any attempt to take it seriously. Great fun.

File this one under Ozploitation AND melt films. A quiet Australian suburb is turned to chaos as a new diet pill is given out to the residents, supposedly to turn them into the ultimate healthy humans - instead, in ever-incrasingly nauseating detail, their bodies and minds literally disintergrate in wild and disgusting ways. Stars Harold from Neighbours.

We love a Troma studio film here, even including this piece of shit. The first CONH is a crappy horny teen comedy with a bucketload of stupid SFX - this one is way worse. A school is built within a giant corporate nuclear plant, where they have pioneered the use of radioactive "sub-humanoids" to perform all menial tasks. Predictably, this goes tits-up. This has all the ultra-trash elements you would expect from a Troma film: bad humour, cheesy punk rock tropes, loads of cheapo FX and a buttload of nudity. also has a giant squirrel at the climax. The first one is better, but this has 'melt' in the title which is this month's theme. Watch both i guess?