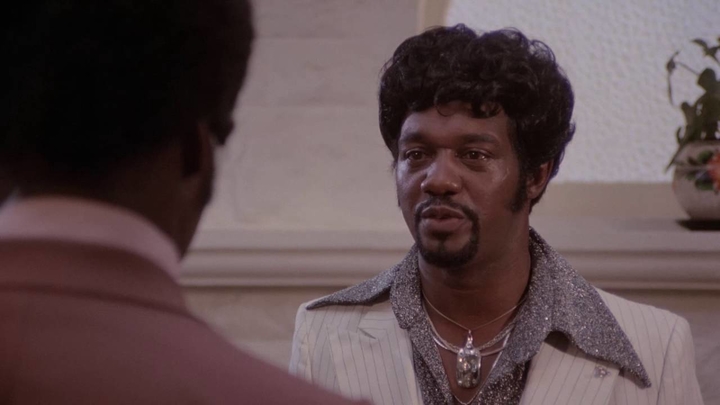 Three wacked out films about PCP.

Rudy Ray Moore had a grand run throughout the 70s as Dolemite - pimp, comedian, nightclub owner and all round boss; battling the baddies with martial arts moves in several Blaxploitation big hitters throughout the 70s. This was his last big screen outing, and it's a hoot. Rudy plays The Disco Godfather: DJ and all-round pillar of the community, with an impressive array of outlandish mack daddy attire, and an intriguing line in catchphrases ('put your weight on it, put your weight on it'). When his nephew, a promising Basketball player, gets 'wacked out' on Angel Dust and hallucinates demons on the dancefloor, the Disco Godfather makes it his mission to rid the streets of the drug, and enact revenge on the 'pushers' responsible, with super goofy results. Attack the Wack! Attack the Wack!

Man, where to start? Phillip Michael Thomas, though these days mainly forgotten, hit BIG in the 80s as co-lead in era-defining cop show 'Miami Vice'. Long before that, he starred in this rather sincere but typically daft flick, as an aspiring singer falling foul to the dangers of the dust. At some point in the 80s, seemingly on a massive ego-trip, Thomas must have decided his overwrought depictions of drug induced freakouts weren't sufficient to send a positive message to the kids, so added some 'linking material'; earnest addresses to camera, and ludicrous fantasy vocal numbers chock full of hyper eighties video effects. Naturally these help to push the film into new excesses of absurdity. As with 'Disco Godfather', attempts to render startling hallucinations as disturbing and horrifying tend to achieve the opposite effect, and who can resist a film where The Gap Band hallucinate into grinning, posturing loons whilst laying down tracks in the studio?

This one has a slightly tenuous link on the PCP front, being neither a drug scare film, nor primarily about the drug. It does feature in the storyline though, and boy does it hit the BAD TRIP vibe effectively. A passion project for DIY filmmaker/Anti-Hollywood outsider auteur Packard (a fascinating character who continues to make deeply eccentric films to this day), this TWO AND A HALF HOUR epic tells the story of Julie, a PCP overdose victim who died in the 70s, trying to contact her brother Bob, an obese, misanthropic watch-seller in a deeply weird, gone to shit invocation of 90s Los Angeles, overrun by hyper aggressive vagrants who keep puking blood and exploding. That said, the film isn't really about plot, it's more an approximation of psychosis. Climaxing in a head-boggling finale in which the rides at Universal Studio mutate into hell (shot guerilla style - Packard got banned for life during filming). Reflections of Evil is an insane and exhausting pile-up of jolting sound effects, frenetic/weird edits, ultra-cheap looking CGI, baffling tonal shifts, Hollywood slander, ripped off bits of other films/music, and everything else you may care not to think of. Unsettling and confusing madness at every turn, and unlike anything else you can think of. Except, perhaps another Damon Packard film.