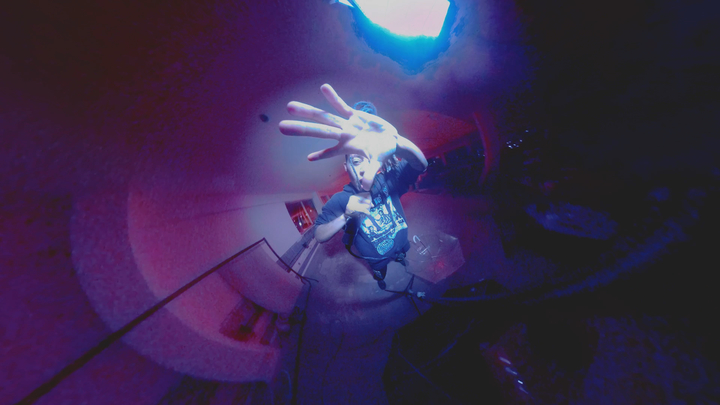 We spoke to Grove about their development as an artist, their journey into the Bristol music scene, and growing up as a Black Queer person in Cheltenham. It's clear Grove's sonic identity is one purely their own, influenced by the frenzied energy of breaks, jungle and punk. Read on to find out more about one of Bristol's most exciting new artists.

Grove recounts the story of their first musical performance: ‘I was a scared little shy kid playing in a heavy metal band, singing vocals over it. A mosh pit opened up in front of me and I had no idea what to do. I just kinda stood there like “cool”...’

Born and raised in Cheltenham, Beth made the move to Bristol after becoming disillusioned with the musical scene in her hometown. 'I'm from Cheltenham, you go on nights out there and you’re hearing the same songs for the past 10 years….then going out in Bristol just hearing the huge range of different amazing shit, going to festivals, I was like I want to be involved in this.’ These formative experiences in Bristol allowed them to add more ingredients to their sonic blender. ‘You chuck a little bit of breaks with jungle, a little punk, a little pop, a little bit of dancehall, a lot of bass... shovel in a whole HEAP of bass and then blend that up, put in your cup and drink it up’. Listening to artists like Death Grips, Clipping and DEBBY FRIDAY showed them the beauty of genre boundaries being blurred within contemporary music. This new age of experimentalism has brought back that ‘who gives a fuck?’ attitude to the underground scene, which has allowed Beth and similar artists to find their place.

Their entry into the world of production came from pretty humble beginnings, recounting stories of their teenage years. They had previously spent time singing over backing tracks, but discovering the GarageBand app opened up a world of possibility: ‘I was like: “On this keyboard there's a kick drum and a snare — I'mma just try something out”. So I just multi-tracked in the most basic and terrible way... I did that from when I was like 14 to 16, and I ended up showing people these GarageBand phone demos - by the second year I was getting shit on lock!’. These GarageBand demos helped Grove connecting with Malaki, who worked at 340 Studios in Cheltenham. Malaki acted as a mentor for Grove in their early days, providing them with a laptop, and offering words of wisdom.  ‘I was a full on introverted child, I was also not the most emotionally expressive so the only way I would express [myself] was through the beats and what I would put on them.’

Rap is currently Grove's more notable form of expression, but they have expored a wide range of musical territory: they recall their past alias, as a singer songwriter, inspired by neo-soul and female side of the genre, as well as taking notes from the 90’s hip-hop their brothers listened to (‘I listened to my version of it’). It's quite hard for them to pinpoint what music they first formed a connection to, as they were open to anything, jumping from Nina Simone to Lana Del Ray and even Paramore, but discovering dancehall artist Spice stands out as a pivotal moment in their musical education. ‘That was a really interesting moment in terms of like the cultural significance of that and what she is talking about - she is talking pure DUTT!  I got time for that‘.

Self expression often calls for an artist to find another self. For Beth, this alternate self is Grove, an alias which allows them to exaggerate certain characteristics of Beth which might not be easily seen on the surface, and create without inhibition. ‘I've got a tune called 'Big Poppa', where I just say some ludicrous stuff, which I was so aware was a joke that I was just like: “This is so funny, it's nothing like me, I'm just gonna say it and it's gonna be braggadocious and all full of steez, when i'm actually quite, not that really.” It's clear to see Grove and Beth are both on a journey of self discovery, led by the people they have met and the music they experienced. This journey has informed both the way they create their art and the way they navigate their personal life. ‘I was going through a big journey reckoning with the relationship with my blackness, because it was kind of non-existent when I was at school. Very non existent, accepting myself being the butt of weird jokes. After leaving school at 18 I went on a full on journey, learning about the rich heritage of the African diaspora and through that, I felt more reassured in myself, wanting to ask more questions to my family and understanding more piece by piece.’

Piece by piece Beth and Grove are putting together an endless puzzle, sometimes using the box as a reference point, but also just enjoying time not looking at the ‘box’ and simply enjoying the challenge of putting together pieces which shouldn't “fit’, whist they sit back and sip on their special made smoothies with heaps of Bass.

The Grip project is supported by Audio-Technica. Since 1962, Audio-Technica’s audio equipment – ranging from cartridges and turntables to microphones and headphones – has been used by a diverse and eclectic mixture of music scenes throughout the world. Find out more and browse their current products via their website.