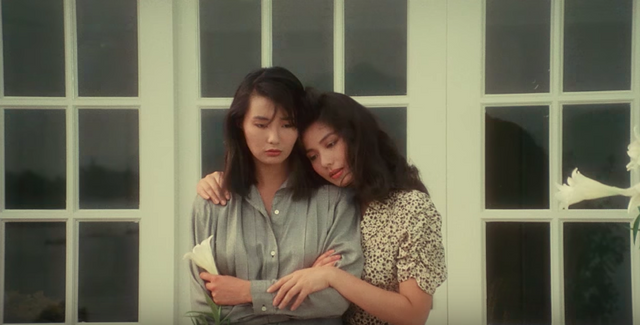 One of the most prolific and eclectic directors from that boundless land of cinema that is Hong Kong is the Chinese-born Yonfan. From commercial movies to art-house hits his cinema explores the sex desires, social habits and landscapes of a fast-moving city always thorn in between the East and the West.

Here are three movies by Yonfan to remind us that love always comes in pairs.

The eighties in Hong-Kong were turbulent times (as ever), and even a romantic cheesy comedy-drama like Last Romance can bore the beautiful scars of yuppies’ dreams crushed by the stock-market crash and the sino-british negotiations about the future of the city. Starring Meggie Cheung and the sulky-teenager figure of Cherie Chung this movie is a story of double deception and it’s way too easy to identify the fate of the protagonists with that of the city of Hong Kong. The beautiful golden patina in which the flashbacks are dressed talks about nostalgia for when we were young, for when we were free. Always nice to see Margaret Thatcher falling down the stairs.

Bishonen is a Japanese term meaning “beautiful youth” who in the hands of Yonfan becomes also maudit. Long considered one of the classics of LGBT+ Asian Cinema, Bishonen finds its queerness in its cinematographic form; in its stylish alternating static and dynamic camera shots. The influence of the aesthetic of chaos typical of Hong Kong cinema of the nineties is evident, and in particular of the action painting technique used by Wong kar-Wai in the kolossal wuxia pian Ashes of Time. Cinematic and love language go hand in hand in a forest of skyscrapers from downtown to uptown, from prostitution to romance and back. Amongst the beautiful boys of the stellar cast (Stephen Fung, Daniel Wu) there is the fugitive appearance of Shu Qi before Hou Hsiao-Hsien. Quickly labelled as too explicit, the only scandal of this movie is that the English language sounds (almost) sexy. “For if I have a son I’m going to raise him to die young, And lay him in the grave that you prepared for me”.

An absolute masterpiece neglected by the critics and distributors in the UK in favour of…(yes, in favour of what?!?). №7 Cherry Lane is the first and last of Yonfan’s animated movies (“It is my first attempt at animation because only through this form of art can my desolation of splendor be delivered”). Set in 1967’s Hong Kong it’s a love story of ethereal beauty and a testament to a city that is not anymore. With an infinite plethora of references taken from classic literature, European paintings, Chinese art and French cinema, №7 Cherry Lane depicts the romantic atmosphere of a city in turmoil between political and sentimental passion. Belle donne of sadness with a very naughty cat.

You can check out more from Cairo Station and listen to his past radio show’s here.